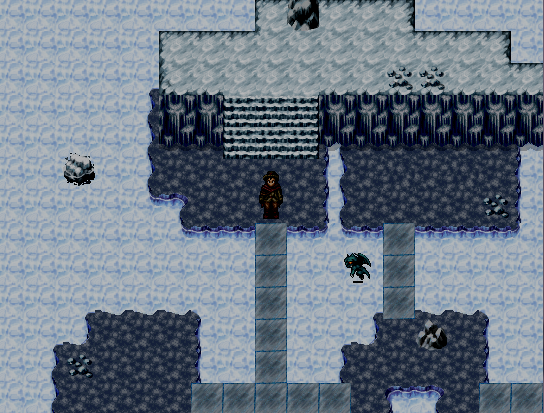 The Ice Lagoon is located in the fourth Ice Cave room from the front of the cave. The exact spawn location is randomized.

The entrance to the lagoon is blocked by a cobweb. The player will need the lantern in order to burn the cobweb and enter the lagoon.

The Ice Lagoon consists of a single map-wide puzzle. As with the other puzzles in the Ice Cave, the core mechanic involves the player sliding on frictionless ice until they hit ground or a block. Additionally, until they are removed, there are several imps which can knock the player backwards. These imps fly a consistent route back and forth across sections of ice, following a predictable time and path. As a result, and unlike the other puzzles in the Ice Cave, this one requires careful timing by the player.

Throughout the Ice Lagoon there are five torches. Unlike other torches in the Dark Cave, these do not have a timer, and are permanently lit once activated by the player. These torches do deplete the fuel in the player's lantern, however, and there are no oil barrels in the room. Lighting all 5 torches will cause the imps to immediately disperse, permanently.

Although "Impish Behavior" is a quest to get rid of the imps in the lagoon, the player does not need that quest to light the torches.

Quests in the Ice Lagoon[]

There are currently three quests which take place in the Ice Lagoon: