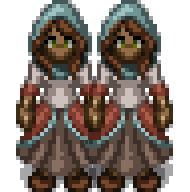 Rebeka and Janika are twin sisters. They are mystic teenagers who worship the Water Spirit.

Identical twins, identical personalities. Rebeka and Janika are descended from a long line of mystic and magical women always derided in their home. The twins’ maternal line was of medicine women, witches, enchantresses, and other powerful-yet-avoided women. Always chased from their homes, these women went from village to village seeking but never finding refuge. Rebeka and Janika’s mother was pregnant when she arrived in Vidar. She used her magical affinity to help Vidar repel the two invading armies, but was pierced by an enemy arrow - she gave birth, and promptly died.

The twins are now 20 years old, and perhaps because their mother fought so bravely to protect Vidar, the town has welcomed (if not fully embraced) Janika and Rebeka. Piri - a worshipper of the Water Spirit - has adopted the twins. Their inherent elusiveness and strong female heritage made them natural candidates to become daughters of the Water Spirit, which has unfortunately alienated them from the rest of town, who worship the Gods.

Beyond each other, the twins are really only “close” with their adopted grandmother Piri and, to a much lesser extent, Cecilia. (Piri has taken on a mothering role for Cecilia as well, and so visits between Cecilia, Rebeka, and Janika were frequent). However, the twins mourn the loss of any woman in town except Bernadett, and if pressed would add Katarina to their list of friends growing up (as they’re all roughly the same age).

The twins’ standoffish behavior should not be seen as disdain for the people of Vidar (quite the contrary, they’re always willing to help and befriend others, they’re just never asked to do so). Nor should their almost otherworldy demeanor be mistaken for some great wisdom - the twins think differently, but not necessarily better or worse.

Rebeka and Janika are largely interchangeable during the duration of the game, although the quests they offer sometimes require that the quest giver's sister is alive or dead. The twins can give the player the following quests:

Additionally, Rebeka and Janika can participate in the following quests:

Rebeka and Janika can reward the player with the following: